This project is to promote and deliver the long sought after and talked about “Mt. Perry Summit Nature Walk”.

This initiative was adopted in 2017 when the newly formed MPCDB contracted the highly regarded consulting firm EarthCheck to develop a Strategic Economic Plan for Mt. Perry. The final Plan identified the Mt. Perry Summit Walk as one of the community’s priorities capturing the majority vote at the final community meeting. (The complete EarthCheck document can be viewed here)

Not only does this initiative showcase Mt. Perry’s natural beauty and extraordinary ecosystems, but it also is an opportunity for Mt. Perry to capitalise on elevated visitor numbers, longer visits and increased per capita spend.

This initiative is part of a bigger picture which is designed to give Mt. Perry an identity and a prosperous future. Combined with other projects such as the “Melbourne Tram” and town beautification, there is no reason why Mt. Perry can’t be the Montville or Maleny of the North and the “Gateway to the North Burnett” 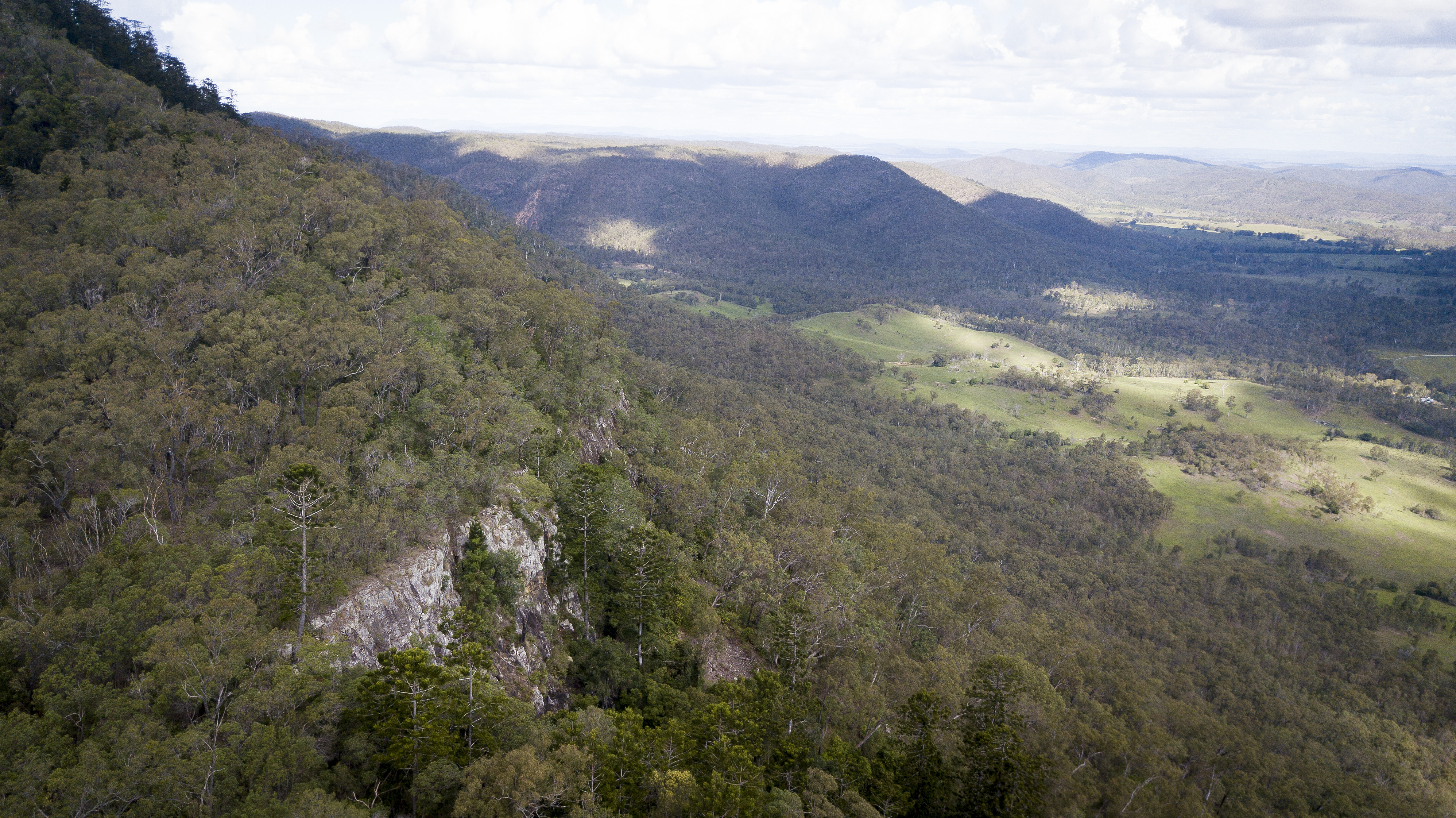 There are 4 landholders bordering this reserve all of which have forwarded letters of support for the Nature Walk and commending the MPCDB on this initiative.
For the Mt. Perry Summit Nature Walk to become a reality, access to the Mt. Perry Reserve is required. Fortunately, there is a gazetted road under the jurisdiction of the North Burnett Regional Council, making access to the reserve possible.

The assembly area for visitors would be directly off Scrub Road which would be designed to officially accommodate perhaps 6 – 10 vehicles. There would also be a covered table and chair facility, also information signage so visitors are able to learn about and prepare for the walk.

The road easement is 20 metres wide and would easily accommodate this type of development. While bollards would be installed to allow walkers through, there would also be locked vehicular access allowing Ergon to their services and maintenance of the Trail.

The easement will be surveyed and fenced accordingly to maintain property boundaries with a visual fence erected on the boundary of one property whose daily activities are in close proximity. This is to maintain privacy and security of these bordering properties.

The MPCDB anticipates that the maintenance of the assembly area and access to the reserve will be minimal.

The minutes of this meeting are available here 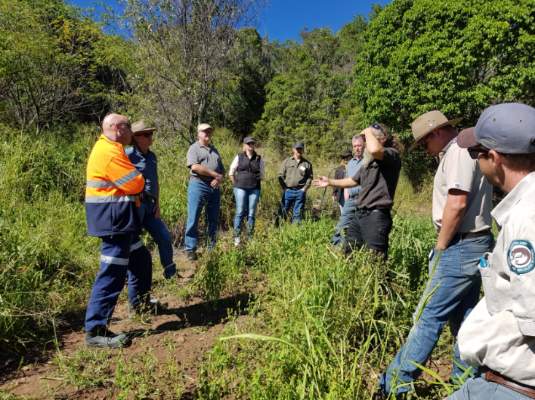 Article from CNBT – by Sam Turner

A PROJECT three years in the making has begun to materialise for a North Burnett community.

The first stage of the Mt Perry Summit Nature Walk kicked off on June 29, with 10 applicants employed to work on the tourist attraction.

Planning between the Mt Perry Community Development Board (MPCDB), the Gidarjil Corporation, Queensland Parks and Wildlife Service (QPWS), Evolution Mining, and the North Burnett Regional Council have made the project possible for the country town.

MPCDB member Ken Schuster said even though the project has had a “pretty long gestation”, the launch was still a momentous occasion.

“It’s been exhausting getting this project off the ground, I can’t think of any other word to describe it,” he said.

“We’ve had a few delays such as coronavirus, but we finally have some trainees in Mt Perry about to embark on the trail to start construction.”

The scope of the works include an assembly visitor area of up to 10 cars, a covered table and chair facility, relevant signage, rest points, and five sections of the walking trail.

Mt Perry has already been successful in securing another tourist attraction last year, in the shape of one of Melbourne’s historic trams, procured by the Mt Perry Men’s Shed. 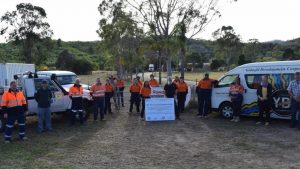 Now with the Summit Walk project, the board believes their town could potentially become the Montville or Maleny of the North, and be the “Gateway to the North Burnett”.

In addition the entire trail will need to brought up to a class three government standard.

Funding was secured from the State Government under its Skilling Queenslanders for Work program, with the board liaising with QPWS, who have jurisdiction over the reserve.

With the walking trail now mapped out, the project can finally begin to take shape.

“Initially we contacted a consulting firm four years ago to complete a strategic economic plan for Mt Perry to secure its future,” Mr Schuster said.

“So we’re trying to put things in place to encourage people to come, and give them something to do.

The natural beauty of the 4km walk will be on display to the community soon according to Mr Schuster, with the trails catering to different skill sets.

“There will be some nice easy grades that will be comfortable to walk, while there are other challenging trails to be created,” he said.

“It will be a rewarding walk for those who take part, with the views from the summit being sensational.

“On good days from the highest peak you can actually see Bargara, which is sensational.” 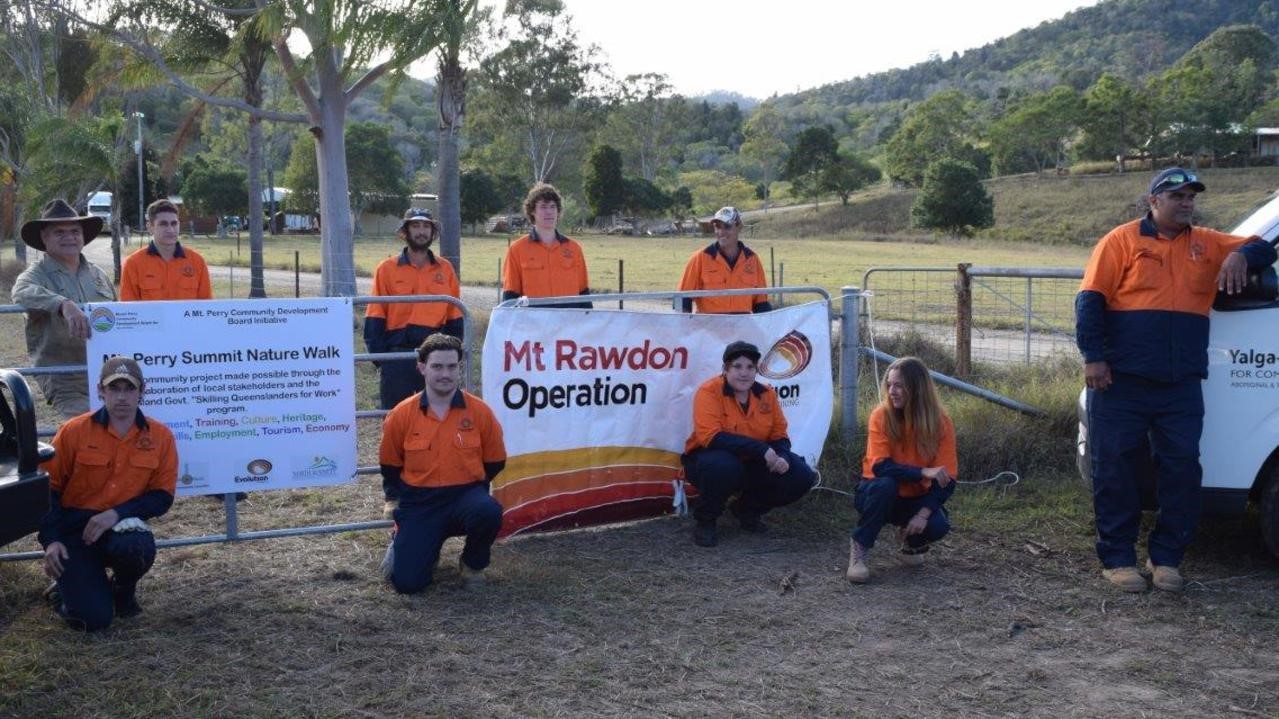 Congratulations everyone on your achievement regarding the Mt Perry Summit walk.

I have been a keen bush walker all my life, growing up in the Bundaberg area with my parents the late Harry and Claudy Frauca, author, naturalist, photographer.

We spent a lot of time exploring the ranges that are a beautiful backdrop to Mt Perry township.

Having done the Mt Perry climb many times, it is a good choice for bushwalkers.

As you may or may not know, hiking as a pastime has exploded across our country. People are just trying new adventures, wanting to “bag” the next summit on their list.

Mt Perry walk will be ideal, with interesting vegetation, some rock, changing ecosystems and then the summit view.

You could probably use such a track for a “Summit Race”.

Be prepared for the crowds to come!

Here in Biggenden I have been exploring the Mt Walsh NP from 1967, and in the past 10 years trading as Experience Altitude I have taken hundreds of people up Mt Walsh and on many off-track remote hikes throughout the National Park.

The result has triggered a huge wave of visitors, exposure by TV stations and the media, and so Mt Walsh NP is now on the national stage.

So it won’t take long after the Mt Perry Walk is finished to see the effect. It is so good to see people getting out, doing exercise and engaging with nature.

Congratulations again to all the team, and your partnership with Mt Rawdon Evolution Mining, QPWS and North Burnett Regional council and the Gidarjil Corporation who will gain employment.

The Mount Perry Community Development Board is to be commended.

The Mt Perry Community Development Board is delighted to be able to announce that the Mt. Perry Summit Walk project is now fully funded.
At the last General Meeting on the 29th July, the MPCDB was presented with a giant check valued at a whopping $221,000. 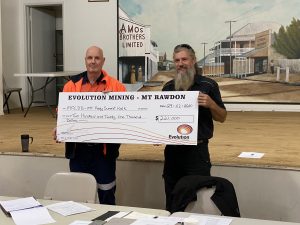 “This is really all about Evolution Mining right now.” President Ken Schuster said.
“From the beginning of this project 3 years ago, Evolution’s Mt. Rawdon Operations Management team has been there with support and encouragement, and thanks to this extraordinary contribution, the project is set to be delivered sometime in the new year.”

The Summit Walk project has had support from a number of other sources including the State Government “Skilling Queenslanders for Work” program, the Gidarjil Corporation, the Queensland Parks and Wildlife, the NBRC and of course members of the MPCDB and individuals from the community of Mt. Perry.

The Summit Walk project had its official launch on the 29th June when 10 local trainees, employed by the Gidarjil Corporation administering SQW funding in the Conservation and Land Management skill set, first set foot on the mountain. Their role will be to design and construct the trail to the AS2156.1-2001 Class 3 Standard under the supervision of QPWS Rangers.
“This is a great opportunity for these young local people to be involved in this high profile project. It will give them a sense of ownership and satisfaction to be part of a legacy which will benefit not just Mt. Perry but the region as a whole for years to come.” said Mr Jayson Kokles, Gidarjil Employment and Training Officer. “It ticks so many boxes – First Australians, Culture, Heritage, History, Employment, Training, Tourism, Economy.”

“Once all is said and done, the total investment in this project will approach $1 million. Not bad for a little town.” 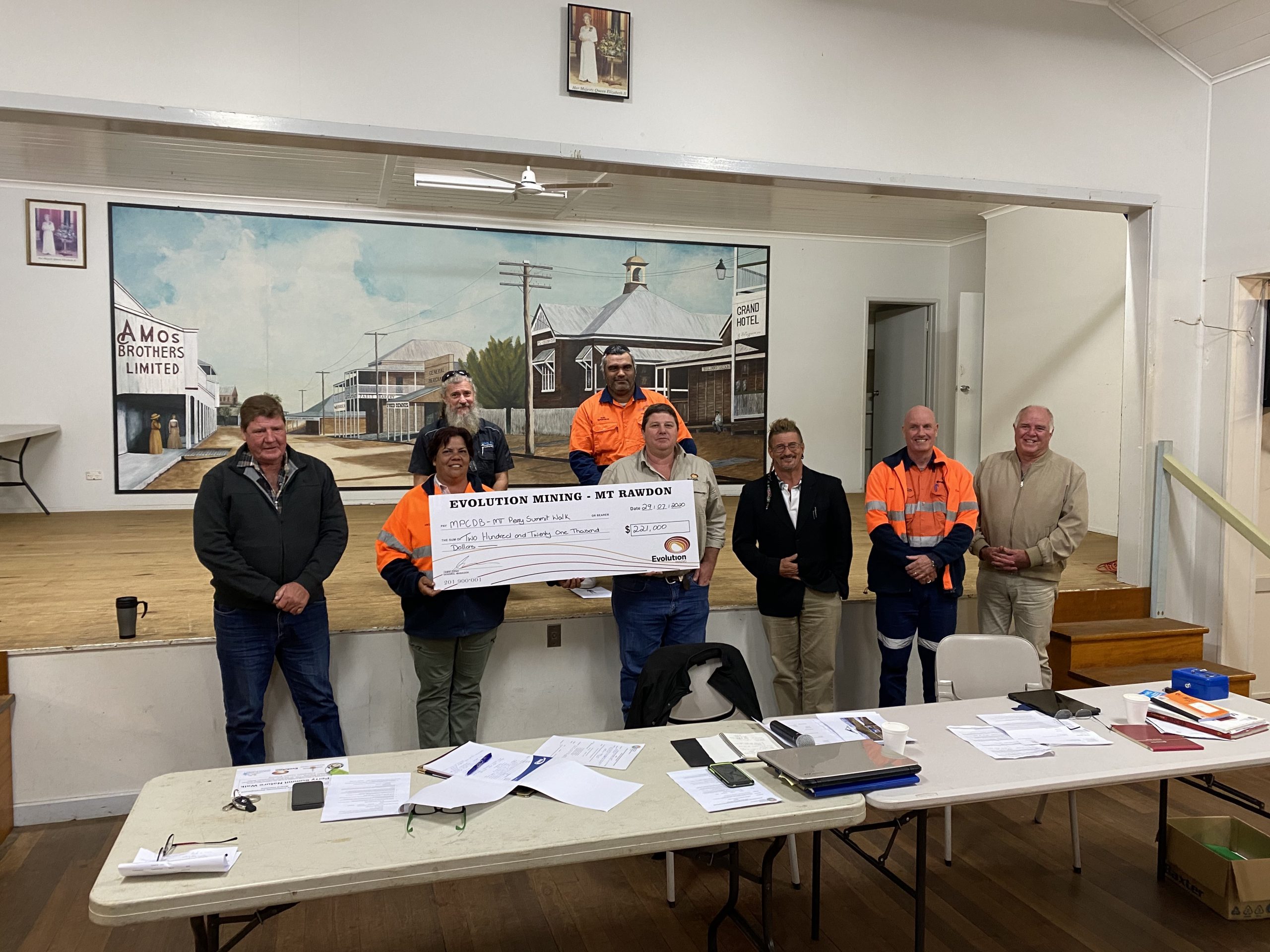